Fred Thompson was a decent man, good politician, and impressive presence. He served on the Watergate Committee, as Senator from Tennessee in real life. On the screen his resume was even more impressive, he was President, CIA Director, Admiral, and District Attorney of Manhattan.

He will be missed.

When I first saw him speak watching a GOP convention in the 1990s I was struck by his presence. I immediately thought, "He's good. He could be president."

He ran for President, briefly, in 2008 but it wasn't his moment. But that brings up another question. If he had won in 2008 and been re-elected in 2012 his Vice President would now be president. Further, with his recurrence of lymphoma he might have been incapacitated, raising some complex Constitutional problems.

This is why we have Vice Presidents. 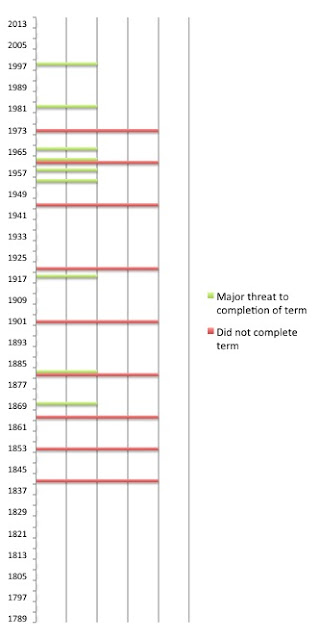 The chart shows that for the last 40 years (going back to 1976) presidents have completed their terms. We had two scares (the assassination of Reagan and the Clinton impeachment) but no one actually left office early.

But in the 40 years before that (1936-1976) one president died in office, another was assassinated, while a third resigned. Further, Eisenhower, Kennedy, and Johnson all faced serious health problems in office.

In the forty years before that (1896 to 1936) one president was assassinated and another died from an illness. Woodrow Wilson was incapacitated for several months. A Constitutional crisis was averted by legerdemain on the part of the First Lady and the President's personal physician.

And the 40 years before that (1856-1896) two Presidents were assassinated. In addition Andrew Johnson was impeached and Chester Alan Arthur was very ill in office.

The point of this little history lesson is that we are living in a period of robust presidential health, unprecedented since the establishment of the Republic.

We have seen extraordinary improvements in longevity and security, but Thompson's untimely passing at a relatively young 73 (of a form of cancer that is generally considered very treatable) is a reminder that, alas, we are still mortal and the end can arrive for any of us, at any time.

The vice presidency was established with this reality in mind. My focus has been on what vice presidents do in office. But its real purpose has always been to step in, if there is an emergency. We have had a vacation from this particular tragedy. But there is not guarantee that this break is permanent.
Posted by Aaron Mannes at 11:17 PM No comments: Links to this post