VPWatch5: The VP Must Kneel Before the President

There has been much news about the vice president recently. And I've been so busy (with Jewish holidays mostly - and I go offline for another in just a few minutes!) so that I haven't even finished my assessment of Pence's influence in the current administration.

The VP too has been busy, what with the new Space Council he's chairing and all the travel to fires, floods, and other scenes of horror (good work - seriously!)

But there was something else the vice president did that dominated the headlines... something at a football game. 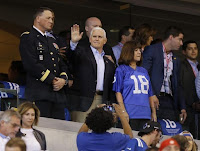 Pence walked out of a Colts game when the 49ers kneeled during the National Anthem. This was part of the President of the United State's feud with NFL players who are choosing to kneel during the National Anthem to protest racism. This has been discussed ad nauseum and I have nothing to add. Although, as a Baltimorean, I have some pretty strong thoughts on the Star-Spangled Banner that have absolutely nothing to do with the current controversy.

My interest is the doings of the vice president.

Reportedly Vice President Pence is a really big Colts fan. But, when the President heard the VP was going to a game (not just any game, Peyton Manning's number was being retired), the President instructed the Vice President to leave if any players kneeled during the National Anthem. Since several members of the visiting 49ers had been kneeling all season, the outcome was pretty clear.

Pence left after the Star-Spangled Banner, missing the game and stirring up controversy. The President, in his inimitable way, blew a little story into a big one, tweeting:


I asked VP Pence to leave stadium if any players kneeled, disrespecting our country. I am proud of him and Second Lady Karen.

Whether or not Pence really wanted to walk out, or was doing so at the President's behest, the tweet robbed the VP of any dignity in his walk out.

Before our more civilized era (since Carter/Mondale) Presidents routinely humiliated Vice Presidents. LBJ's treatment of Hubert Humphrey was particularly cruel. Nixon (having suffered at the hands of Eisenhower) was pretty terrible to Agnew (who, in fairness, was legitimately awful.)

What's odd here is that it is not clear that the President wanted to humiliate Pence, but rather that he wanted to make the event about himself. His cruelty was casual and backhanded rather than LBJ's systematic viciousness towards Humphrey (who on some level the Texan feared.)

So what should Pence have done? Let's pretend that Pence would not have walked out on the game if given the choice. (He didn't walk out on Hamilton when the cast addressed him directly with a political message.) But defying the president is not a minor thing to do - especially for a vice president.

The only way for the vice president to influence policy is through access to the president and presidents do not have a lot of patience for disloyal VPs. This President may be touchier about loyalty than most, but really this applies across the board. The VP is the one person in the administration who cannot be fired - thus disloyalty is particularly problematic.

The VP could take stand, spending their term isolated from the president over at the Naval Observatory, perhaps issuing public statements against the administration. This would probably not go well. The president (any president) would savage an openly disloyal VP. And what would this gain the VP? Not much. The president still has significant support in the party and might receive an uptick in support from the opposing party - but hardly enough to offset the significant ideological divides.

If the president were in trouble (i.e. being impeached) the VP's smartest play is quiet loyalty. A VP too publicly ready for the president to leave office will not be well-regarded. Ford and Gore stayed out of things and let the process move forward on its own.

We are not near impeachment. That's a reality. The VP believes he can still be useful, fixing what he can in a dysfunctional administration. To be effective the VP needs access to the President. And for that, when called upon, having no significant Constitutional authority and, according to Chase Untermeyer, only one true resource to offer the president - time, the VP must kneel before the chief of the executive branch.