VP Garret Hobart - hot or not? 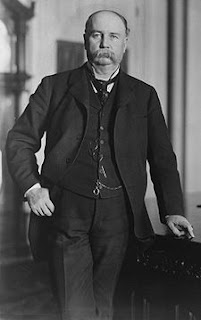 In my endless quest for vice presidential influence it is always a pleasure to learn something new and non-trivial!

Garrett Hobart, McKinley’s first vice president, mattered – his home (VPs had to arrange their own lodging until 1975) was called the “Little Cream White House” (which had once been McClellan’s HQ) and he was often referred to as “Assistant President.”

Hobart had been the speaker of the New Jersey House, President of the New Jersey Senate, and was a wealthy attorney for the railroads. He was not McKinley’s choice for VP, but the Republican party needed New Jersey and he fit the bill (although he was caught between his desire to enjoy a private life and his ambition and sense of duty.)

What is fascinating (to me at least) are the sources of Hobart’s unique influence. He was by all accounts an engaging individual who gave prudent advice. His wife looked after McKinley’s wife, who was ill and found her duties has First Lady onerous. The Hobarts also entertained Washington, sparing the McKinley's that duty. Hobart also helped McKinley manage his investments. Was this personal connection sufficient to allow McKinley to break a decades-old institution of ignoring the VP? Does it also matter that Hobart, having never held national office, was not a political threat?
Posted by Aaron Mannes at 4:36 PM