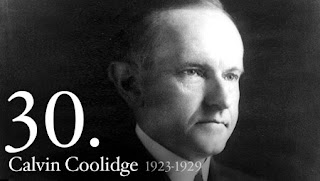 An article in Slate explores the Republican fascination with Calvin Coolidge. The author discusses how Reagan's biggest moves seemed to be ripped from Silent Cal's play book. But the veneration of Coolidge reflects something more profound then policy preferences.

A striking feature of our recent past has been the transformation into routine practice of the actions we once treated as exceptional. A President may retain liberty, in Woodrow Wilson's phrase, "to be as big a man as he can." But nowadays he cannot be as small as he might like....

In instance after instance the exception behavior of our earlier "strong" Presidents has now been set by the statute as a regular requirement. Theodore Roosevelt once assumed the steward's role in the emergency created by the great coal strike of 1902; the Railway Labor Act and the Taft-Hartley Act now make such interventions mandatory upon Presidents. The other Roosevelt once asserted personal responsibility for gauging and for guiding the American economy; the Employment Act binds his successors to that task. Wilson and FDR became chief spokesmen, leading actors, on a world stage at the heights of war; now UN membership, far-flung alliances, prescribe that role continuously in times termed "peace." ...And what has escaped statutory recognition has mostly been accreted into presidential common law, confirmed by custom, no less binding; the fireside chat and the press conference, for example, or the personally presented legislative programs, or personal campaigning in congressional elections.

In form all Presidents are leaders nowadays. In fact this guarantees no more than that they will be clerks. Everybody now expects the man inside the White House to do something about everything. Laws and customs now reflect widespread acceptance of him as the great initiator... A President today is an invaluable clerk. His services are in demand all over Washington....

Critical to this transformation was FDR and the massive expansion of the Federal government in response to the Great Depression and World War II. Coolidge (Republicans would prefer not to mention Hoover) was the last leader President and part of being a leader was the option not to take action. Consider a few choice Coolidge statements:

Four-fifths of all our troubles would disappear, if we would only sit down and keep still.

If you see ten troubles coming down the road, you can be sure that nine will run into the ditch before they reach you.

Perhaps one of the most important accomplishments of my administration has been minding my own business.

They criticize me for harping on the obvious; if all the folks in the United States would do the few simple things they know they ought to do, most of our big problems would take care of themselves.


In venerating Coolidge, more than merely approving cutting taxes and other pro-business policies the Republicans are harking back to an era where little was expected of the President, the government's role was not all pervasive, but at the same time when action was needed it was decisive.

Also, while Coolidge was seen as pro-business, this attitude was heavily tempered by a belief in morality:

It is only when men begin to worship that they begin to grow.

Prosperity is only an instrument to be used, not a deity to be worshipped.