Rise of the Vice President's Staff

Originally posted on TerrorWonk on December 20, 2012.

This was continued (and probably expanded) in the Bush Administration, where Cheney's chiefs of staff also held the rank of advisor to the President. 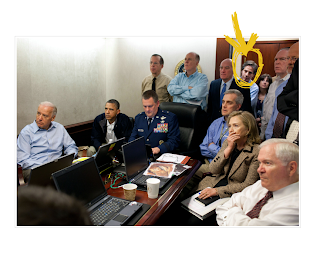 But this integration has reached a new level in the Obama-Biden administration.  First are the number of people with strong links to Biden in the West Wing.  But also, according to the invaluable Plum Book, besides Biden's chief of staff, there are five Biden staffers who also hold the rank of Deputy Assistant to the Vice President (including the chief of staff to Jill Biden) and two more who are Special Assistants to the President.

But a picture tells a thousand words.  In the now iconic picture of Obama and his team in the situation room monitoring the raid that killed Osama bin Laden, indicated in the picture with a big yellow circle and arrow (helpfully added with the app Penultimate) is VPNSA and Deputy Assistant to the President Antony Blinken.  He may not be in the front row - but he is in the room.  And in government, once a position/procedure/protocol is established it goes on forever.
Posted by Aaron Mannes at 10:03 AM No comments: Links to this post

Reposted from TerrorWonk, where it appeared on December 12, 2012.

Jews around the world are now well into Chanukkah, which like most Jewish holidays has some really fun surface stuff (presents, gambling, and fried food), and deeper meanings.  Hanukkah celebrates a military victory.  During the Hellenic Age, Israel was under the rule of Selucids of Syria - a dynasty established by one of Alexander the Great's generals.  He sought to Hellenize the Jews.  Plenty of Jews were open to this new culture, but traditionalists opposed it and when the Greeks began pushing for pagan sacrifices in Jewish temples the traditionalists revolted.  The Jews won, threw off the yoke of Greek oppression and made a holiday out of it.

But this goes deeper because it was a clash between two already ancient yet revolutionary civilizations with deep cultures.  It is a clash that has continued through the ages in various forms.  Perhaps now it is best understood as a tension, but this tension often referred to as the conflict between Athens and Jerusalem is one of the great drivers of Western civilization.

I will not elaborate on this conflict.  I remember the speaker at my graduation from St. John's College characterizing it as the conflict between freedom (Athens) and equality (Jerusalem) and he didn't have much use for the latter.  I didn't have much use for the speaker.  I thought the conflict was more reason vs. transcendence - but I'm just a tourist in this land.  It might be spinakopita vs. falafel for all I know.

But there are big differences between Greek and Jewish culture.  Inscribed at the Temple of Apollo at Delphi are the words "know thyself."

Inscribed above synagogue arks around the world are the words, "know before whom you stand."

People visited the oracles seeking wisdom and advice about the challenges they faced and for help making tough decisions.  There are more than a few stories about generals seeking the oracular wisdom before a crucial battle.  The visit to the oracle was to obtain information to help the seeker move forward in the world and for that knowing oneself is of great value.

But at synagogue people stand before the Almighty to pray.  Certainly one can pray for benefits, but prayer is much more complicated than that.  It might be understood as a humbling connection with the awesome existence of all creation.  The inscription above the ark is a rejoinder that what is being done is no joke and that the one praying is a tiny piece of an enormous cosmos - wisdom is to be found in humility.

Perhaps the conflict between Athens and Jerusalem can be characterized by AJ Heschel's characterization of space and time (or maybe Saul Bellow on the self vs the soul).  Space is the physical world around us.  Greek discoveries in science, technology, and organization dramatically expanded humanity's ability to master the physical world - a baby step towards the comfortable modern society we currently enjoy.  We are tiny in the face of the universe, but in our immediate human dominated surroundings we can forget that.  Time, in contrast, is simply beyond human control and quickly stretches our powers of comprehension.  The best we can do is come to terms with this.  Jewish theology and practice can provide some small succor and give birth to other monotheistic religions that could also provide this comfort.

And VPs?
Right, but let's bring this back to my obsession - the vice president.  The words at Delphi and the words above the synagogue ark are both useful pieces of wisdom - but they depend on one's circumstance.

The President, has risen to the pinnacle of achievement, but faces the endless challenges of the one on top - the big boss.  The President must know him (her) self.  What are my strengths, weaknesses, what can I do and what can't I do?  In consulting the oracles (political consultants) the President must weigh their advice against his own abilities and tendencies in his efforts for worldly success.

The Vice President is effectively powerless, except when the President listens.  The Vice President requires tremendous humility - not easy for a politician who is extremely accomplished in their own right.  Presidents are not the Almighty - but a Vice President must know the one before whom they stand and be humble in the face of their ultimate responsibility.

OK - it was a reach - but this is how people writing dissertations start to think.  If there is an oracle for PhD students it should probably have the wisdom - know for whom you write.
Posted by Aaron Mannes at 10:01 AM No comments: Links to this post