For the book I'm thinking about what the politics of reconstruction will look like in an age of Creedal Passion. If none of this makes sense to you, read this. A big part of that is really getting the work of Stephen Skowronek on presidential time.

Have you read the links, great, let's move on.

Central to Skowronek's thesis is that presidents have tremendous power (this responding to Richard Neustadt's great Presidential Power, which argues that presidents are actually quite limited in their power and must bargain to get anything done). The great presidents not only have power, they have authority - they have a warrant to exercise their power. Skowronek argues that this warrant is shaped, as much by the president's actions, as by the time in the political cycle in which they operate. 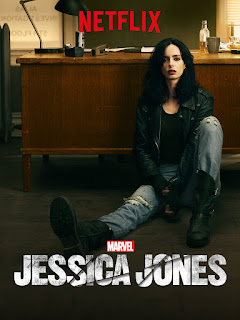 To get my head around all of this, I needed to understand what it means to have power, without authority (with a dayjob in government, I understand the reverse.) It all came together, watching Jessica Jones on Netflix. This is a tremendous series based on a Marvel comic book which Netflix has chosen to end after its third season (here's hoping that will change!)

Jones is a powered individual (there are others) who has enormous strength. I'd guess she is roughly 100 times as strong as an average person. In one scene she casually tosses a full-grown adult into the air and they land twenty-feet away. I figure I could do the same with a lawn chair. She is bullet-resistant, but not bullet-proof. She can definitely be hurt. She lives openly, working as a private eye and she's got an interesting and complex backstory and lots of issues. Just watch the series.

So she has power. She can wander around town beating up bad guys, breaking into buildings, what have you. She has no warrant to do so. The police get touchy about her exercising her powers and there is a great deal of public suspicion of powered individuals. If she uses her powers in a public way which is not approved, she is seen as a greater threat than the criminals she is fighting.

She can fight the police, and win, for a time. But she can't fight the entire police force, which can bring to bear some formidable weaponry. Thus she needs to cultivate police support (something that Jones, who is extremely touchy, finds very difficult.) This is a trope in pretty much every story involving a private detective, constantly pressing against and sometimes beyond the boundaries of what the police find acceptable. But a super-powered person has far greater freedom to press against the boundaries. The police do not want to take her on - she can easily break out of prisons - also she can punch people to death. On the other hand, her ability to become the object of public hatred is
much, much greater than a typical P.I.

As Jessica Jones uses her powers, she starts to accumulate enemies. Eventually those enemies could bring her down. If she can obtain authority to use her powers, support from the police and some modicum of public acceptance, she can at least negate some of this opposition.

One of Jessica Jones' responses to this challenge is to be a good private investigator. She can get into places others can't (she can jump on top of building for example and break locks.) But she still needs to know what to look for and where. She works hard on these skills so that she can maximize the use of her power.

I started writing comparisons to recent and current presidents to illustrate all of this further - but why bother. But if you insist on that, maybe read this by Daniel Drezner.
Posted by Aaron Mannes at 4:28 PM No comments: Links to this post