Belated President's Day - Some Lists of Great and Not-so-Greats

The typical Presidential list is of the greatest presidents. That is always Lincoln, Washington, FDR and then whatever particular political hobby-horse the list-maker has. Jefferson, Jackson, TR, Wilson, and Reagan all make regular appearances.

More interesting is listing the worst presidents, although that too is rife with current political judgments. Half of America will say Obama while they other half will say W. Andrew Jackson, who was a giant mere decades ago is now reviled. Nixon was hated, well, for being Nixon. I find this hard because in my humble estimation, our presidents were decent and capable people who did the best they could given the options they had.

So here, instead, are some odd-ball lists.


Note that both had their big achievements in foreign policy. Other one term presidents include Herbert Hoover, Jimmy Carter, William Howard Taft, Franklin Pierce, Benjamin Harrison, John Adams and John Quincy Adam. Not an inspiring list.


Teddy Roosevelt was, well, Teddy Roosevelt. Truman too had some pretty huge achievements, establishing the post-World War II architecture and the overseeing the Marshall Plan. Lyndon Johnson was the architect of the Great Society and a champion of civil rights. Chester Alan Arthur is an interesting outlier - not normally on any presidential list except for great facial hair. He was considered a political hack. He had been appointed head of the NY Customs House (a really, really big deal because most federal government revenue was from taxes on imports and the biggest portion went through NY.) But he was appointed as part of the patronage system and then put on the ticket as VP as a sop to that political machine. (In fairness, he was actually a very capable administrator.) When President Garfield was assassinated, by a disappointed job-seeker, Garfield's political patrons looked forward to taking over the spoils system. But Arthur cut his ties with them and as president championed Civil Service reform. Arthur, surprisingly, turned out to be the president we needed, just when we needed him.

Presidential Achievements Outside the Presidency

Most significant accomplishments as military leader


The top three were all the leading generals in major wars, they are on the all-star list of generals in U.S. history and really world history. Washington gets the edge because , unlike Grant and Ike, he had the less economically capable army and managed to defeat a super-power. The bottom three were all good generals in their own right, but - as AJ Liebling said of Jack Dempsey, "He may have been a great champion, but he didn't have much to beat."


All of these men were scholars of some renown and authored many books (note what I consider significant.) But, Herbert Hoover was also a very successful businessman. Probably the most successful businessman to be elected president - take that for what it's worth (personally, I think he had the misfortune to be president at the wrong time.)


George Washington did two enormous things in public life that had a profound impact on the United States of America before becoming president. First, he turned down kingship of the new United States and was a founder of the Order of Cincinnati and he chaired the Constitutional Convention. He was not the intellectual architect, but he had the political savvy and will to see the thing through. A huge achievement.

Madison was a key architect of the Constitution and co-authored the documents owner's manual (aka The Federalist Papers.) He was also Secretary of State. Martin Van Buren was a masterful politician and architect of the modern Democratic party. Hoover was nominated for the Nobel Prize for his efforts at famine relief for Europe after WWI. He was Secretary of Commerce and Under-Secretary of Everything Else under Harding and Coolidge where he had an enormous number of administrative achievements.

Jefferson wrote the Declaration of Independence. LBJ was master of the Senate, but threw it away to be JFK's VP.

Nixon had a huge achievement. He somehow crawled back from ignominy to become a respected figure - that's got to count for something. Carter, even though I dislike many of his undertakings, has had a vibrant post-presidency, trying to do good wherever he was able.

This is utterly subjective, and with a bit more research I'd probably add a bunch more names to this list. But, let's do some very basic analytics.

Most appearances on any of these lists:
A few things leap out. First, Herbert Hoover was an enormously talented man who had the misfortune to go into politics. Being an executive and being a politician are very, very different offices. Although in fairness if Hoover had become president in 1920, he would have served a mild term or so, done some technocratic reforms and left the White House respected like Calvin Coolidge is now. Someone else would have presided over the great crash of 1929.

But the more presidential finding is George Washington. He has perhaps lost the battle against Lincoln for mantle of greatest president. Fair enough - Lincoln was a GREAT president. But, imagine if Washington had died suddenly before the first presidential election (people died all the time in those days.) He would still be remembered for his enormous military and political achievements - which were essential to the very establishment of the United States of America. He would not have been just rolled into Presidents Day Weekend - he might still have a day of his own. In that sense, like Hoover, was he a great, great man that was somehow diminished by the presidency?

Posted by Aaron Mannes at 12:23 PM No comments: Links to this post

Gentle reader. I've been slacking at posting here lately (although there is new stuff over at Terrorwonk). I promise to do some special stuff in the next day or so over this long weekend dedicated to honoring our nation's highest office. 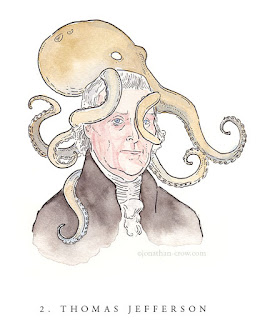 10. Forward I wrote for the only illustrated book of vice presidents with pictures of octopi on their heads - VEEPTOPUS!

9. The presidents and politicians in general we see are mere caricatures of real people who wrestle with the same things we all face. (Two for one!)

8. A little something about a lesser-known president, and his surprisingly influential vice president.

7. As VP George H.W. Bush ran a counter-terror task force for Reagan (bringing together two of my areas of interest - terrorism and VPs), here's a short academic paper on it.

6. Here's a strange little thing about how - in high school about three decades ago - I kind of predicted Palin.

5. No writing about the presidency would be complete without a dive into Nixonology.

4. Here's a bit about the old/new phenomenon of White House courtiers - no presidency would be complete without some.

3. Here, I take a look at a well-known tale about Cheney, and turn it upside down, showing him, not as an all powerful eminence gris, but rather as a dutiful servant of the president.

2. This is the single most read/linked to/cited thing I think I have ever written. It is a summary and review of Stephen Skowronek's Presidential Leadership in Political Time, which I think is a hell of a book, with a very compelling model of political cycles.

1. There is no post which better summarizes what I have really learned - in the heart, which can matter a lot more than the head, than this post about critical empathy. The post is about Jimmy Carter (who I remember as a feckless, hapless figure) but it is really about every president each of whom "only did the best he could. No man could do more."
Posted by Aaron Mannes at 1:22 PM No comments: Links to this post