As a student of the national security and White House decision-making process, your faithful blogger has been overwhelmed by the doings of the current administration. In fact, I considered doing a post simply summarizing the different things I would like to write about - although I believe that is called a Tweetstorm. Even the discussion of the princeling son-in-law's ridiculous almost vice presidential role deserves another post - after a prominent (and generally sensible) person defended it. (If you need a response to that defense, here is an excellent one.)

But then I looked at the picture of Trump's ExCom during the Syria strikes and something (not a Tomahawk missile) struck me. Kremlinologists long relied on pictures of the Soviet leaders to derive power. This open source effort has expanded exponentially with the Internet, allowing deep insight to closed regimes like Pyongyang. It can even serve a purpose here, in our open society, and yours truly has not hesitated to dabble in it to highlight the expanded role of the vice president. 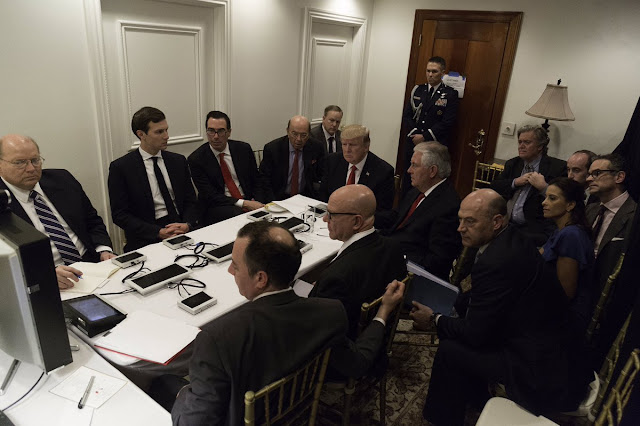 Going around the table we have on the far side of the table, facing us: Deputy Chief of Staff Joe Hagin, Jared Kushner, Treasury Secretary Steve Mnuchin, Commerce Secretary Wilbur Ross, and then the President. Sitting behind them in the corner is Press Secretary Sean Spicer. Continuing around the table is Secretary of State Tillerson, National Security Advisor McMaster, and Chief of Staff Reince Priebus. Just behind McMaster is National Economic Council chief Gary Cohn and next to him is the Deputy National Security Advisor Dina Powell. Next to Powell are Michael Anton, Assistant to the President for Strategic Affairs and Senior Advisor Stephen Miller, and chief strategist Steve Bannon. The VP, SecDef, and CJCS are all there by video-conference.

The stark differences are:

The Good
Putting aside thoughts on and preferences for specific players, what can we know about the broader structure of decision-making here.

Let's start with the good. While some have criticized the inclusion of the economic team in the strike video, I'm not sure this is a bad thing. In international affairs there is often a divide between the money people and the guns people. This can lead to real discontinuities. Economic disturbances can cause security problems, while military actions can create economic problems. Yet the practitioners barely understand one another. More closely integrating these decision streams could bring better policy.

The Bad
The bad is the large number of political types in the room. Everyone in the White House is a political, it is the nature of the beast. But past presidents have tried to - at least somewhat - section off the policy/national security types from the political staffers. There are innumerable stories of presidents (and other politicians) telling policy experts, "Tell me what to do and leave the politics to me!"

And the Ugly
If the attendees of this meeting were part of a carefully considered plan, great. But the reality is that it appears to have been haphazard, shaped as much by who was around. This is also highlighted by the lack of national security staffers present. Without them, you may not have the necessary people with the working knowledge of the issues. The administration has not established an orderly process and is still being run by personal whim.

One can speculate as to who is up and who is down. Bannon and his crew were in the back, while new Deputy National Security Advisor Dina Powell was closer in. That Powell is also a protege of Gary Cohn could be a good sign for further integration of security and economic issues.

It cannot be said often enough, good process does not guarantee good policy. But lousy process makes it really hard to get anything but lousy policy.
Posted by Aaron Mannes at 3:30 PM No comments: Links to this post

Is Jared Kushner the de-facto VP?

This is the portfolio of the President's son-in-law Jared Kushner. It is also the typical portfolio of... wait for it... vice presidents!!!

Vice presidents are my thing, but this pretty much sums up the kinds of things they do.

From George H.W. Bush on, each vice president has chaired various policy councils and reform initiatives. Putting the VP on the case gives an extra oomph to the inter-agency process and it works reasonably well.

Vice presidents make lots of high-profile trips on the president's behalf. This is not just funeral duty (although that can be important.)

But of course, VPs also provide critical and discreet advice to their Presidents. Often they can say things no one else can say.

It looks like that is what Jared is doing.

President's have discretion to organize their staff and assign responsibilities as they see fit. And every White House has courtiers. They play a number of necessary functions. Still, even putting aside specific questions of Kushner's own experience and capabilities, there are some problems. Some of these problems are managerial, but some are deeper.

Kushner is being given the role of czar - the Presidential appointee who can crack heads and break logjams. It is an appealing notion, but the actual record of effectiveness is mixed. For a White House staffer, the ideal czar issue is narrow and short-term - not huge and open-ended. The White House does not have the internal staff to run issues, their role is rather to push and prod the bureaucracy. Kushner's issues however are huge and open-ended.

Kushner has also been tossed a vast number of issues very quickly. It is difficult to see how anyone could work many of them effectively at the same time. Further, many of these issues (like relations with China) are considered by the interagency process. This process can be slow and cumbersome - it is also necessary to ensure critical aspects of an issue are not missed. Giving an overwhelmed White House staffer this broad portfolio is a recipe for policy freelancing and missing key factors.

If a czar is needed for a particularly big or high-profile issue, that czar is more likely to be a cabinet official or the vice president. These figures bring greater stature to the role which can be important in pressing through change and for reassuring the public that the issue is being taken seriously. Cabinet officials are confirmed by Congress and vice presidents are elected. If it is an issue of national concern, the key official should in some greater sense be accountable.

Conceptually there is a distinction between line and staff. A senior aide for a powerful congressperson may wield more de facto power than a junior congressperson. The aide, no matter how important, is still staff and can be fired by their principle. The congressperson is answerable to voters - to the American people.

I cannot say, categorically, that any single role taken on by Kushner is unprecedented. There have been occasions where domestic political advisors addressed foreign policy issues. They have certainly taken on domestic policy issues. And of course Kushner's oft-reported role is Trump Whisperer (ie close confidant) is not only a common White House role, but also frankly a necessary and welcome one. 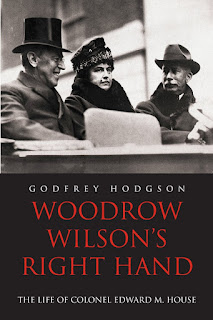 Taken in total, however, Kushner is taking on a broader range of White House roles than any staffer before him and at a higher profile - while also serving as a sympathetic ear. The only figure I can think of to have held a comparable role is Colonel Edward House as the surrogate to President Wilson. That was a century ago, and there was a significant difference between that case and the present.

Now, when the 45th President is signaling that an issue is of critical importance, where other Presidents have sent their vice president, this President prefers to send his son-in-law.

It does not appear to me that any of this, in anyway, is unconstitutional or illegal (although it may be organizationally unwise.) But it does seem, deeply and profoundly off.
Posted by Aaron Mannes at 12:17 AM No comments: Links to this post