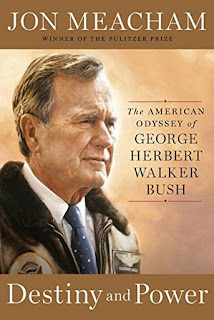 Most of the press about the new John Meacham biography of George H.W. Bush focused on his comments about Cheney and about his son's administration (more on that in a follow-up post). But I was rather more interested in some other Vice Presidents. I was hoping for more on Bush's own time as VP and maybe for a snippet or two about Quayle. I was disappointed - but elated at the same time.

Disappointed because there was nothing much new about Bush 41's time as VP. At the same time pleased, since I have much, much more about the Bush vice presidency. Although that too is a cause of concern. In assessing a vice president's influence, the researcher is studying shadows on the walls of the cave. Was the Vice President exercising influence at all? Was an apparent case of influence really the case was it just rumor or - as likely - just something the President was going to do anyway.

The Vice President Bush in the Meacham biography (and in other sources as well) appeared constantly worried about his relationship with the President - was he really helping, what could he do better - all while also looking out for his own political future.

On the other hand, Meachem's primary unique resource was access to Bush 41 himself. When I was doing my dissertation I made inquiries about interviewing the former President. I was told that he wasn't talking to anyone but his biographer, but also that he was not such a great interview because he didn't like to dwell on the past. One can imagine that after being president - leading the country through a war AND the end of the Cold War, he wasn't inclined to spend much energy on his time to his more ambiguous time as second fiddle.

So I'm inclined to think I've got something new to put on the table - given the limited context in which the VP can operate. For a hint as to some of the stuff I found, see here.)

As for Quayle, I didn't expect much. There was an extensive footnote that stated that Bush personally wanted to push Quayle forward on some issues and thought he was doing ok - but his senior advisors resisted and sought to limit Quayle's activities. There was little talk to Quayle exercising substantial influence and this basically confirms my findings.

There is of course another angle to this. Presidents don't like being the bad guy, they usually have people around them to say no. Certainly President Bush could have pushed Quayle forward over his advisors' objections. Did he choose not to have that particular fight or did he acquiesce in a way that left him blameless? Even the most genial politicians are pretty scheming - and I don't blame them for it one bit!

So I've been reading the book idiosyncratically. First, I looked at Bush 41's time as VP, then his post-presidency, and then his time at CIA - with a quick scan for references to Quayle. Then I wrote this post.

Then I read the introduction and was vindicated! Meacham's key research sources were access to Bush himself and access to the diaries. But, Meachem notes the diaries during the vice presidency were sporadic. So I am justified in believing my findings were significant even though they were not mentioned by Meacham. Much of the vice president's influence is low-key and occurs in private meetings. The vice president does not make a habit of marching into the president's office and instructing the president on an appropriate course of action. But during lunches or "drop-ins" the vice president might mention something or have a suggestion or useful piece of information. Bush was the vice chair of the crisis management committee (the president is always chair), but Bush chaired when Reagan didn't attend. This put Bush on point at several critical junctures (such as during the Polish crisis in late 1981) where he briefed the president.

There was another interesting point in the introduction. In person George H.W. Bush was an impressive, handsome, graceful, and charming man. Everywhere he went he made deep friendships easily. But, whereas Bill Clinton or Ronald Reagan's charm and presence translated out through television - Bush 41 did not extend beyond the room he was in. His athletic grace came off as awkward, his language (glib in person) came off as odd and fractured on TV.

Finally, I did another search for more on Quayle, but alas there was nothing.
Posted by Aaron Mannes at 11:56 PM No comments: Links to this post