Trump running-mate, Indiana Governor Mike Pence, stated that his model for the vice presidency is the Cheney model. There are many possible ways to interpret this statement.

The initial take is that it is ham-handed, since there are not tons of Cheney fans around (although the Cheney haters weren't going to be voting Trump anyway). But maybe, it is a secret message that really Pence would be running things.

That is also unlikely. Probably Pence is simply saying he would be an active and engaged vice president, like Cheney. Of course for a Vice President Pence to exercise any influence, Trump would have to listen to him. It is not clear if Trump listens to anyone.

For all of its political freight, the Cheney model is overstated. Cheney was a difference in degree not kind from his predecessor. He had a larger national security staff than Gore, but at the expense of his domestic policy and political staff. Cheney sat in on lots of meetings that VPs had not previously sat in on. But no specific case where he pushed a policy the president did not care for has emerged.

Perhaps that is the most significant point. Cheney did the president's bidding. He aired his thoughts, but there are innumerable instances of President Bush rejecting Cheney's preferred position.

Finally, Cheney was also, by all accounts, incredibly deferential to the president.

In that sense, because Trump will bring  a depth of inexperience unknown in the modern presidency, the Cheney model might be dead on for a VP Pence. He will need to get involved in everything, as the President will bobble the ball on issue after issue.
Posted by Aaron Mannes at 11:02 PM No comments: Links to this post

So I haven't written about Trump much. I swore off and am glad I did. It is bad for the soul. I am not exaggerating when I write that. When I turn to Robertson Davies (my favorite novelist!) it is for matters of the heart and the soul. He writes, as do most novelists I guess, about feeling. He does so unashamedly and unabashedly. You'll see what I mean.

So Trump is sounding off on foreign policy. There is really no point in discussing his comments. He promises to destroy ISIS with a secret plan. There are no secret plans. Destroying ISIS is a matter of resources and commitments. We could apply more resources, but the President has chosen not to. He has sound reasons for this although there are also arguments for applying greater resources. It is not an easy or obvious call. The American people are not screaming for a huge commitment of forces to the Middle East (been there, done that.) Destroying ISIS quickly would require aligning with various forces in the Middle East that um... do not have our best interests at heart. There is no secret plan. PERIOD!

It is pointless to mull Trump's policy pronouncements. Doing so elides the simple reality that, as Daniel Drezner so aptly puts it, "the Republican party willingly chose an ignorant bigot as its nominee."

Robertson Davies, as my regular readers (both of them - HI MOM, it's called a blog, not a computer circular...) surely 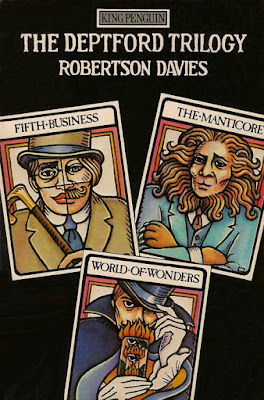 know, was a Canadian novelist and essayist. I have no idea if he knew of Trump. He died in 1995 and while alive was an inveterate newspaper reader, so perhaps he did. But he knew what Trump was about.

Davies was interested in money and the very wealthy. He did not hate them. He saw the ability to make money as a particular talent that did not necessarily imply the possession of other forms of intelligence. (His own father was born poor but became wealthy, possessing that talent.) Davies was interested in what people with great wealth did with it - he saw it as an expression of the soul.

Davies greatest work, The Deptford Trilogy, centered around the extraordinarily wealthy self-made Boy Staunton. Each book is the story of someone who's life was shaped by their contact with Staunton. I don't want to say too much. A fundamental theme of Davies is that each thing contains its opposite. Wealthy, worldly and handsome Staunton was at his core hollow and thus never fulfilled by his worldly success. This was his destruction.

I am not the only one to have seen that - Garrison Keiller's brutal column says the same, imagining Trump's inner voice saying: when this is over, I will have nothing that I want.


He wasn’t a complete human being at all. He was a tiny bit of one, unnaturally developed: something in a bottle, an organ kept alive in a laboratory. I thought he was a sort of primitive savage, but he was something absolutely modern and up-to-date that only this ghastly age could produce. A tiny bit of a man pretending he was whole.

(Here again, I am not original, the much wiser George Weigel notes that Trump is Mottram come to life.)

But here is something, creepier and darker perhaps. Trump was famously an acolyte of the Rev. Norman Vincent Peale. Davies reviewed Peale's classic, The Power of Positive Thinking and found it repulsive. He describes Peale as debauching the English language, but more than style Davies was horrified by Peale's message of prayer as a technique, an instrumental tool to worldly success.

Get God on your side and success is yours. God is not the rewarder of virtue, but the Genie in the Bottle, who comes when you utter the magic formula. We must deny this is religion in any high sense.

Perhaps we may deny that it is religion at all. Mystics have often warned against powers which may be set at work by means of prayer and which are not related to God, but rather to the Devil. To speak of the Devil in our time is to invite mockery; he is not in fashion. Therefore let us say that there are powers which may be called to one's aid which are not the powers of the highest good, and that these powers can be cajoled or bullied into giving us our own way.

Those regular readers of mine know I've been thinking a bit about magic. While in Ireland I heard tell of St. Patrick's duel with a Dark Druid. I have had a great desire to understand these things in modern terms - make them greater by making them real. I could easily imagine Trump as a sort of Dark Druid, with his words summoning forces he does not fully understand, building an all-encompassing self concealing a tiny soul.
Posted by Aaron Mannes at 11:23 PM No comments: Links to this post